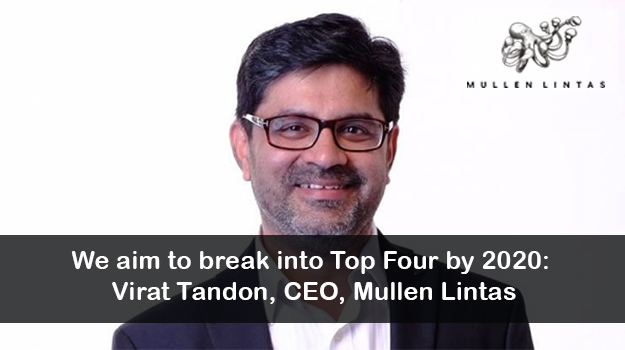 WE AIM TO BREAK INTO TOP FOUR BY 2020: VIRAT TANDON, CEO, MULLEN LINTAS

Two year old Mullen Lintas is expecting to break into the league of top for creative agencies in India by 2020 as the agency focuses on making big pitches to win large clients.

“There have been a lot of uncertainties in 2017, which may continue for some time. Hence, rather than looking at one or two years, we have set our growth targets for 2020. While I cannot quote any number, I can say that we will be among the top four to five agencies in three years, both in terms of size and reputation,” Virat Tandon, CEO, Mullen Lintas, told BestMediaInfo.com.

The second independent agency of Mullen Lowe Lintas Group that had a first full year of operation in 2016 witnessed phenomenal growth in 2017, overcoming economic challenges. However, the agency fell a little short on its growth targets for the year.

“We have our planning cycle in October-November and at that time we had aimed for slightly higher numbers. Although a little short on target, we have still grown at a very high double-digit rate and we are sure we will continue in healthy double-digit,” said Tandon. “We had a great momentum in 2016. Had we maintained that, it would have been a much faster growth for us but nothing to complain about it.”

Falling margin and stiff competition from independent young agencies have affected the profitability of network agencies. Despite being a part of IPG, Mullen Lintas grew in terms of profitability too, albeit on a smaller base.

“Profitability for the overall industry is a challenge and there have been a lot of discussion and debate on it. But we have grown over 2016 when it comes to profitability. 2017 has been a satisfying year for us on all fronts, be it new business wins or profitability or work,” said Tandon.

Mullen Lintas won Too Yumm from RP Sanjeev Goenka and launched the brand in the healthy snacking category. Besides, Fossil, Quikr and Motilal Oswal were significant wins for the agency.

The agency debuted at No. 7 in agency ranking of Brand Equity in 2017, which Tandon credited to its team and good work that the agency has been able to produce consistently.

“The best decision that we made was not to create Mullen Lintas like a second agency where one puts a B team. We brought the best talent and everything is a consequence of that decision. If you look at our core team, it is comparable with the top three agencies,” he said.

New businesses, especially large size clients that will expand the base, will be the growth driver for the agency as Tandon puts it, “We are looking at big pitches and big wins.”

Mullen Lintas CEO is a believer of the relationship agency model and prefers long-term clients rather than projects. “We do projects very tactically because you invest a lot in every project even for the same client again and again. If you come up with a big idea for a brand, it seems like a futile exercise. For an example, we came up with a big idea for Motilal Oswal, which was on a project basis but they are keen on continuing with us. The idea is working for them and the campaign could be built over longer time. Brands should not change their ideas frequently and there should be some consistency. By the time consumers start acknowledging the ideas, it takes time. My belief is that brands are built over a period of time, working consistently on it,” he said.

On the fee structure, Mullen Lintas is comfortable on retainership or commission basis as long as the resource that it puts and value it creates are remunerated in a fair manner.

Going beyond creative capabilities, the agency is planning to build some additional capabilities in 2018. Without revealing much, Tandon said, “We are firming up our plans and will announce the same by February-March. The challenge here is that it needs to be something that gives power to our core strength and secondly it should have a profitable proposition.”

At a time when creative agencies are all out to become as much agile as possible to meet the challenges thrown by fast ever-changing consumer behaviour, and keeping technology and content at the core of their transformation, Mullen Lintas is carefully evaluating its business sense in adopting new streams. “My experience about agencies going social or content way raises concerns about their earnings because clients are not paying for that work,” said Tandon. “We are trying to see what services we can add which will complement our strength as an idea agency. They should be margin additive and not margin dilutive.”

The article was first published in BestMediaInfo.com