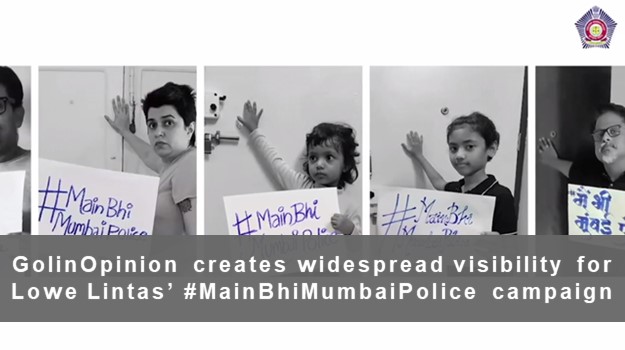 In the wake of the novel Covid-19 pandemic outbreak, in a country like India with a total population of 1.36 billion, social distancing is the need of the hour in order to contain the spread of the virus. However, in a city like Mumbai that houses millions of people, it can get daunting to physically ensure every citizen stays put inside their homes.

The Mumbai Police took the bull by its horns and urged its population of 18.4 million people to stay indoors. Through the #MainBhiMumbaiPolice campaign conceptualized by Lowe Lintas as part of their #FilmfromHome initiative, the messaging of self-policing and the importance of staying indoors was driven in order to help Mumbai police.

To ensure scale and visibility, a high impact, integrated PR and social media strategy was pushed strategically by GolinOpinion to reach the maximum number of people in the shortest possible time frame. In record-time and with zero commercials involved, GolinOpinion managed to garner social media support from over 30 highly influential Bollywood personalities and influencers.

Moreover, the agency facilitated media stories on entertainment portals discussing how celebrities had supported the efforts undertaken by the Mumbai police. The campaign was also featured in leading A&M media titles including CNBC TV18, The Economic Times- Brand Equity, Livemint, The Financial Express, Yahoo!, Campaign India and Adgully, to name a few. Regional language dailies also published articles around the initiative by the Mumbai police.

Using the power of influence, GolinOpinion drove major national awareness and engagement in a short period of time. Through their efforts, the team targeted a potential reach of over 315 million via media outreach and 207 million via social media, further multiplying conversations and augmenting brand recall.