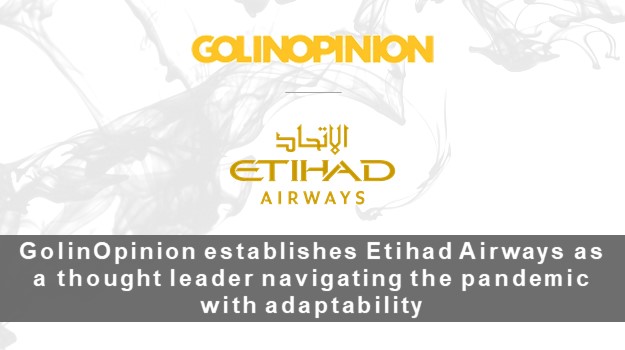 Since the onset of the COVID-19 pandemic, the industry that usually connects people across continents was witnessing minimal movement. The aviation industry was also among the several sectors that has been adversely affected due to this global health crisis.

Despite this industry coming to a standstill, impacted by the crippling effect of air travel restrictions, GolinOpinion’s objective was for Etihad Airways, the national airline of the UAE, to remain connected with its guests and partners in India, despite having most of its fleet on-ground for the first time in its history. It was also imperative to educate the audiences on what the “new normal” for air travel would look like, whilst ensuring Etihad was strategically positioned as an industry leader, introducing every measure to ensure the safety of its guests and employees alike.

GolinOpinion devised a simple but impactful two-pronged strategy, aimed at building industry confidence and remaining connected with the consumers, which ensured top-of-mind recall for Etihad Airways amongst guests and partners in India.

GolinOpinion ensured that Etihad remained connected with its partners via key trade media activities, exploring different formats, from a virtual summit to strategic interviews as well as frequent authored pieces, conveying not only how the airline had weathered the impact of the crisis, but also throwing light on the value the airline is offering to partners.

We facilitated a virtual summit for Etihad’s country head as well as global leaders on Trav Talk, a travel trade platform belonging to the largest trade media house in India, the DDPPL Group, making Etihad Airways the first international airline to directly address the travel trade in India

Via dedicated interviews and authored articles in key trade publications such as Travel Trade Journal, Today’s Traveller and Trav Talk, we positioned Neerja Bhatia, the ISC VP, as an industry thought leader, discussing how Etihad is assessing the situation and its strategy to move forward

GolinOpinion also secured key interviews and authored pieces for the Eastern Region VP, re-iterating Etihad’s commitment to the region and discussing the resumption of a wider network of flights through July and August

At a time when consumers were unable to experience the airline, GolinOpinion leveraged Etihad Airways’ unique offerings and key innovative announcements to ensure it remained connected to the consumers, communicating with them at every step through the pandemic. Over the past quarter, the team’s efforts have resulted in Etihad being recognised as an airline that has put ‘Wellness’ at the core of its renewed experiences

GolinOpinion managed to facilitate editorial interviews for the ISC VP with the country’s leading radio stations in India, Red FM with RJ Rishi Kapoor and Radio City. With a combined listenership of 4 million, these interviews enabled Etihad to communicate to the consumers directly, reassuring them of how the airline was utilising the downtime to ensure it’s in the best shape for when it could return to flying

A large format video interview was conducted for the ISC VP with one of the biggest digital travel platforms in the country – Curly Tales, that gave a glimpse into how Etihad had put ‘Wellness’ at the core of its renewed air travel experience

GolinOpinion leveraged key brand announcements, positioning Etihad Airways as a pioneer in the aviation industry having a technology-driven approach with a key focus on wellness and renewed customer experiences