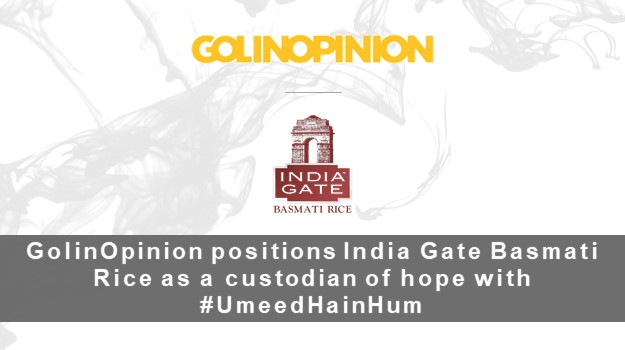 India Gate Basmati Rice flagship brand by KRBL – the world’s largest rice millers recently organized the world’s largest food drive as part of their #UmeedHainHum initiative along with Michelin star Chef Vikas Khanna as a step towards resolving the huge but important task of providing basic meals for all the needy and under privileged across the country.

India Gate, being one of the oldest and leading rice brands in India, and a true custodian of hope  started – “Umeed Hain Hum”, an initiative that extended hope to people in need by feeding them. The brand extended their support to feed lakhs of people since the start of lockdown and provided more than 20 lakh meals under their campaign #UmeedHainHum. Through the initiative they provided meals to old- age homes, orphanages and leprosy centres and millions of other families in India who are not only fighting against Corona, but also against hunger.

GolinOpinion’s role as the PR partner was to position India Gate Basmati Rice as the corporate who not only addresses key societal needs, but also is a key contributor in taking care of their local community. To support the initiative, GolinOpinion pushed out a press release that gained visibility with a total of 73 portals publishing the news. Important portals like Business World, PTI, IANS, UNI, The Week, Outlook India, etc.  carried the initiative resulting in a total PR Value of  21.4 million and reach of 252 million in just 1 WEEK.

To thank the warriors, KRBL Ltd – India Gate also organised a drive in Mumbai to distribute food and essentials for the city’s very own dabbawalas and to the daily wagers Television staff of Mumbai. As an extension and to reach out to more people in need, KRBL Ltd- India Gate organised a food distribution drive in Vrindavan to support many women living in ashrams and old age homes. This is one of the biggest and most important initiatives organised by the brand to support the women residing at Vrindavan.

To enhance and increase the local share of voice, GolinOpinion stimulated a local media outreach with publications with editions in Vrindavan and Agra under the #UmeedHainHum campaign. Interviews were set up for Mr. Ayush Gupta to highlight the initiative and the idea behind the unique effort of the brands. Press release was disseminated around the Vrindavan initiative and Mumbai initiative for additional visibility in key local media and was published by 17 portals.

For corporate building of the brand as the torch bearer for Vocal for Local, Corporate Feature in Business India and thought leadership article in ET Brand Equity was explored.