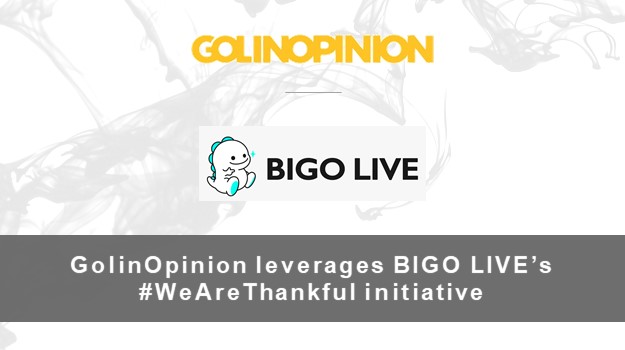 BIGO is a fast-growing Singapore Internet company established in 2014 that operates products and services in more than 150 countries and enables people to live-stream their favorite moments, showcase their talent, and stay connected with friends in a positive, healthy, and creative way.

With an aim to create maximum awareness about coming together on one platform to express gratitude and spread love to all corona warriors, Bigo hosted a campaign called #WeAreThankful suggested by GolinOpinion

With the entire nation coming together to fight off Corona and showing their gratitude to the heroes of our country who are selflessly serving the corona patients, BIGO LIVE, a leading global live streaming platform, on Janta curfew also participates spread their love to corona warriors through their campaign #WeAreThankful.

The Bigo Live virtual family (their users/hosts) got together on their live streaming platform with a common cover picture & a gratitude message that said #WeAreThankful, content creators of BIGO went on to demonstrate their gratitude whilst urging their followers to do the same. This was an activity created by the app where they motivated thousands of its users to go Live and pay their thanks towards the services given by our front line runners helping India fight this pandemic.

It was an iconic event as over hundreds of broadcasters continued streaming for the duration of one hour, and cheered for the medical, aviation & police forces & all those real-life heroes who have been selflessly working, round the clock.

GolinOpinion amplified the initiative with the media and garnered features in some of the leading publications in the industry including PTI, Outlook, Indian Television, AFAQs, Media Infoline, Yahoo News, HT Syndication, amongst others. For this activity, we also achieved high visibility in various CAT A regional and online publications. 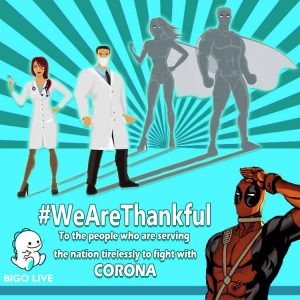