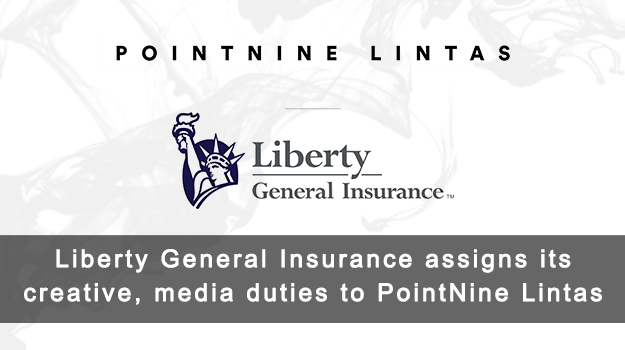 Liberty General Insurance Limited, one of India’s fastest growing general insurance companies, has appointed the omni-channel creative agency PointNine Lintas to handle its creative and media duties. The appointment was announced as an outcome of a multi-agency pitch that was won by the agency on the back of its omni-channel approach.

Pankaj Arora, President – Personal Lines, Banks & Affinity & Marketing, Liberty General Insurance India said, “As part of our marketing strategy, we are embarking on our first ambitious brand outreach program. We found the strategic and holistic approach of PointNine Lintas compelling and felt that they were the right partners to help us create a roadmap for our brand campaign. We believe that the brand campaign will help us establish greater emotional connect and recall among larger public.”

Liberty General Insurance Limited is a joint venture between Liberty Citystate holdings PTE Ltd, a group company of US Headquartered Liberty Mutual Insurance Group, a leading multinational property and casualty group, Enam Securities, a privately owned and managed firm that makes long-term investments in listed companies, as well as backs entrepreneurs building valuable private companies and DP Jindal Group, an industrial conglomerate. With its product offerings across the motor, health and commercial lines, Liberty aims to drive brand awareness and recall by building strong differentiation in the market. To partner the insurance company in this endeavour, PointNine Lintas will be putting together a multi-disciplinary team to craft communications for the brand in the market.

Commenting on the win, Vikas Mehta, CEO – PointNine Lintas said, “The Liberty win is another example of the magic that happens, when you bring creative and media skill sets under one roof. We are delighted to see our omni-channel approach working. The more important task of creating a sharp position and go-to-market plan for Liberty Insurance begins now and I have great faith in our team to make it a success.”

PointNine Lintas has put together a multi-disciplinary team to deploy its service-stack that includes brand planning, comms planning, creative and media services, led by Vidhu Sagar, National Director, Media – PointNine Lintas and Executive Director of its media division – Lintas Mediahub. The agency is currently working closely with the team at Liberty General Insurance and its distinct offerings in the market.

Sagar said – “While life insurance still has some level of understanding and traction in the Indian market, general insurance is conspicuously low on the priority list of most Indians. Our job is to ensure that Liberty General Insurance penetrates this inertia-ridden market and makes a clear case for itself through some differentiated messaging.”

PointNine Lintas is already working on the brand’s upcoming campaign, more details will be revealed soon.