Listen to the Roar 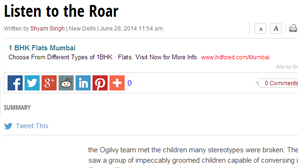 From entertaining media dark states to getting celebrities to advertise for free, two Cannes Lions winners tell us the behind-the-scenes story:

The Cannes Lions 2014 saw Indian companies firmly establishing themselves as forerunners in a new interactive and innovative space in advertising, winning 27 Lions. PHD India won two golds and Lowe India one gold for Kan Khajura Tesan for their client Hindustan Unilever while Ogilvy & Mather India bagged three bronze for Message Barter, a campaign for their client Akanksha Foundation, a non-profit organisation based in Mumbai. We spoke to two winners, whose lesser-known creative campaigns have made a difference to everyday living.

How do you connect with customers who have no access to electricity for over 8-10 hours a day? FMCG company HUL found the answer. They began the Kan Khajura Tesan (Ear Worm Station), a radio station activated on mobile phones, which gave listeners their dose of entertainment and news, interspersed with advertising. Through a simple missed call the campaign combined privatised radio service free of cost.

Its key lay in its easy access. “The absence of mass scalable communication channels to reach the rural and small town audiences in India, who are a large consumer base for HUL’s products, was really the birthplace of this idea. Today, India literally has a mobile in every ear. PHD along with HUL conceptualised ‘free entertainment on mobile’ and Kan Khajura Tesan was born. A simple to remember number, the easy mechanism of a missed call, a memorable jingle and logo created by Lowe caught the imagination of the masses. The lack of ‘normal’ media channels gave birth to a new, first-ever media channel,” says Jyoti Bansal, Managing Director, PHD Media. “The creation of the name itself had a spin so that it connects with the masses and has a cultural relevance to the region. The aim was make it sticky and hence remembered so people call Kan Khajura Tesan, again and again,” says Anaheeta Goenka, Executive Director, Lowe Lintas and Partners, India.

The opening shot of this video shows a little boy wearing a Krrish mask at the booking counter of a multiplex cinema. In a superhero cape, he jumps up on a stool propped up by his friends and poses as Hrithik Roshan does in the movie. Passers-by pause and watch as the friends hold up a placard that says, “Coming Soon, Krrish 3″. And in a blink of an eye, they vanish. Then, four children in uniforms have a message for Roshan. In fluent English, they ask him to visit their website and encourage his fans to volunteer as teachers for them. It’s a message barter, they have campaigned for him, now it’s his turn.

“The Message Barter campaign had a clear purpose of getting people to come and teach in Akanksha schools. We hope more people are inspired to join the teaching profession and provide the education that all of India’s children deserve, irrespective of their backgrounds,” says Chitra Pandit, Director of Development and Communications, Akanksha.

When the Ogilvy team met the children many stereotypes were broken. They saw a group of impeccably groomed children capable of conversing in English. That’s when they decided any marketing strategy had to reflect the same intelligence and cheekiness that defined the children of Akanksha. “The task was to reach out to the widest audience at the lowest cost. One way was through celebrities and their fan following,” says Jigar Fernandes, Associate Creative Director, Ogilvy and Mather India.

Unsurprisingly, almost all the celebrities responded including Amitabh Bachchan, Farhan Akhtar, Sachin Tendulkar, and Chetan Bhagat spread Akanksha’s message and in doing so became their brand ambassadors, for free.