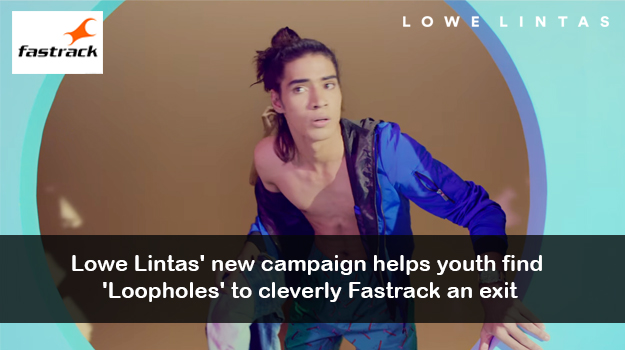 Can every sticky situation be navigated by simply finding Loopholes?

Fastrack has launched a new watch collection – Loopholes that specifically highlights the design inspiration – perforations on the straps The brand, finds appeal with youth on the back of some consistent and edgy work put out by Lowe Lintas’ Bengaluru office.

Shiv Parameswaran, ECD – Lowe Lintas Bangalore pointed out “Sometimes, the product itself can lead to an idea. In this case, it was the perforated design pattern of the watches. The typography we created for “Loopholes” also became the escape route for all our characters. After all, every situation has a loophole. You can get away if you spot them.”

The creative leap that the agency took was to create two worlds, one within the hole and the other on the outside. The characters in the stories are seen getting their way by literally using the perforations as Loopholes (also the name of the watch collection) to their advantage and make a quick getaway.

Ayushman Chiranewala, head of marketing – Fastrack adds “The Loopholes collection is inspired by perforations on sports apparels blended with the unique Fastrack design language. It’s made for the youth who is always on the move. The campaign highlights the ‘holes/ perforations’ on the watches and adds a quirky and fashion forward touch which depicts how the consumer is on the look out to get out of sticky situations by finding out loopholes. The collection has 36 Watches sporting various functions like day date feature and multifunction feature, split equally between guys and girls.”

Speaking on the agency’s edgy work produced for the brand, Hari Krishnan, President (South) – Lowe Lintas quipped “When Fastrack showed us their new range of perforated watches, we saw the quirk right there. Every perforation is a loophole and every loophole, an opportunity.”

The article was first published in ETBrandEquity.com