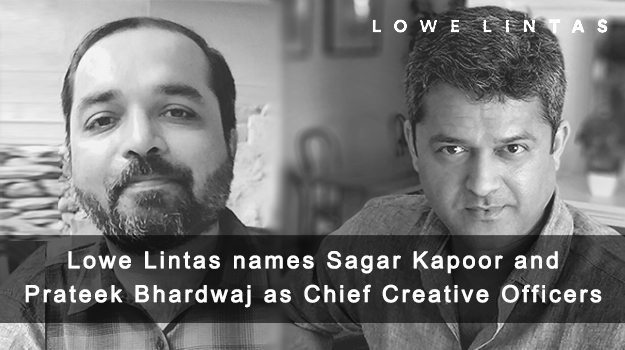 Mumbai: MullenLowe Lintas Group, today announced the new creative leadership of its agency, Lowe Lintas. The agency has named Sagar Kapoor and Prateek Bhardwaj as its Chief Creative Officers (CCOs). These appointments mark the completion of the transition that started with the recent exit of Arun Iyer.

Amer Jaleel, Chairman and CCO – MullenLowe Lintas Group, has hand-picked the creative duo for these roles, in consultation with Arun Iyer. Speaking of the appointments, Jaleel states, “The task of choosing and appointing the creative leadership of Lowe Lintas is an incredibly enviable and unenviable position to be in! Taking over from the likes of Balki and Arun Iyer for one. And taking charge of the legacy and for the future of Lowe Lintas during these challenging and exciting times, too. But we have found the two most gifted and ideal individuals possible, what a great relief and what a sense of pride at this announcement!”

Sagar Kapoor has been elevated from within the agency where he was Executive Director, based in Mumbai. He’s spent over 15 years with Lowe Lintas serving various local, regional and global mandates. Sagar is credited with some iconic campaigns like Lifebuoy’s #HelpAChildReach5, including Gondappa and Future Child that were implemented globally and has consistently been one of the most awarded global campaigns for over five years. He’s been the Global Creative lead for the brand, Lifebuoy, with work that’s published in over 40 countries. Other notable brands include Axe, Pepsodent, Zee, Astral Pipes, ICICI Prudential Life Insurance and Godrej HIT.

Commenting on the appointment, Kapoor said, “Being brought-up in Lowe Lintas, this elevation is both encouraging and challenging. Encouraging because I have worked with some fantastic leaders here, joining their league is quite humbling. Challenging of course with the dynamics of the industry evolving all the time! I hope to keep the tradition of Lowe Lintas going, of keeping our brands ahead of the curve.”

Prateek Bhardwaj moves from McCann Worldgroup where he was National Creative Director. With over 20 years in the business, he has earned a slew of prestigious awards including the Grand Prix at Cannes Lions and Jay Chiat Awards, and the coveted Black Pencil at D&AD. He is ranked India’s No.1 most awarded creative for 2018, according to various sources, including CampaignBrief Asia.  Prateek is the Creative Director behind the much acclaimed recent work on Nescafé (stammering comedian and RJ Rishi), Ministry of Public Health, Afghanistan (Immunity Charm), and Incredible India. His other notable work includes long-running campaigns for Dettol and PayTM and the still-famous launches of Sprite (Bujhaye only pyaas), Kinley, and Chlor-mint. Prior to McCann, Prateek has also been a creative entrepreneur and founded Eleven Brandworks in 2008.

Prateek is the Creative Director behind the much acclaimed recent work on Nescafé (stammering comedian and RJ Rishi), Ministry of Public Health, Afghanistan (Immunity Charm), and Incredible India (Find the incredible you). His other notable recent work includes long-running campaigns for Dettol and PayTM. His earlier work includes the still famous launches of Sprite (Bujhaye only pyaas, baaki all bakwaas), Kinley (Boond boond mein vishwaas) and Chlor-mint (Hum Chlor-mint kyon khaate hain). Prior to McCann, Prateek has been a creative entrepreneur, and founded and ran Eleven Brandworks out of Mumbai and Gurgaon.

Speaking about the appointment, Prateek Bhardwaj said “Decade after decade, Lowe Lintas has maintained a culture of excellence. I have always been a big fan of the work created here, and also the people behind it. To be entrusted with carrying this torch forward is both a privilege and a challenge. I look forward to working with this extraordinary team, and to contribute to the legacy of this great institution.”

Commenting on the new CCOs, Jaleel says, “We’ve seen the two CCO model work well in the past for the agency. The new generation of leaders taking over is the start of Lowe Lintas evolving its creative product while being true to the Lintas soul.”

The new appointments will be effective Jan 2019. Both Sagar and Prateek will operate out of the Mumbai offices of Lowe Lintas, reporting to Amer Jaleel.