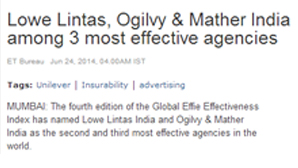 MUMBAI: The fourth edition of the Global Effie Effectiveness Index has named Lowe Lintas India and Ogilvy & Mather India as the second and third most effective agencies in the world.

This year the top position was grabbed by Sancho BBDO Colombia. Incidentally, in the last two years O&M captured the top slot in the list and is the only Indian agency to break into the top 10.

Kamal Shoor, head of planning for Ogilvy Mumbai, said, “It is not about the number and the ranking but being one of the top three in the world and on top across agency offices. It is also a reaffirmation that our approach to advertising works.” He adds that a number of clients either shy away from working with the agency or question its methodologies as the agency puts creativity at the centre of everything.

“This just proves that creativity is the heart of ROI (return on investment)”, he says. This year Lowe Lintas India makes its debut in the Effectiveness Index. It is also the only awards show in which the agency participates.

“We are number two in the world and number one in APAC (Asia Pacific) which is a ratification of the type of work we do and believe in. Also it becomes easier to convince clients that that what we believe in is right”, says Joseph George, CEO at Lowe Lintas & Partners.