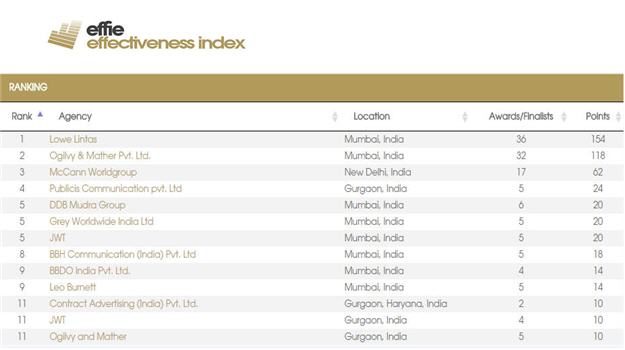 The 2015 Global Effie Index was released last week and Lowe Lintas + Partners, India was declared the Most Effective Agency in India and in Asia Pacific. And #3 in the world! The agency was #1 in India and Asia Pacific in 2014 too.

Infact, Lowe and Partners too, for the first time ever broke into the Top 5 in the Network Ranking. It was ranked # 4 globally.
Into its fifth year, the Effie Effectiveness Index identifies and ranks the most effective agencies, marketers and brands by analyzing finalist and winner data from more than forty national & regional Effie Award competitions. For the 2015 rankings, it compiled over 3,100 worldwide Effie winners and finalists between January 1, 2014 and December 31, 2014.
Sharing his views on the achievement, Joseph George, CEO, Lowe Lintas + Partners, India said, “Ofcourse I am delighted. It ain’t easy to do this 2 years in a row. I am happy just seeing this as a reaffirmation yet again and most so for own selves, of the type of work we want to do, like to do and are good at!”
Just earlier this year, WARC 100, had declared Lowe Lintas + Partners, India as the No. 1 Creative Agency in the World. And Ad Age had declared Lowe Lintas + Partners, India as the Runner-up International Agency of the Year. Both, firsts for India.