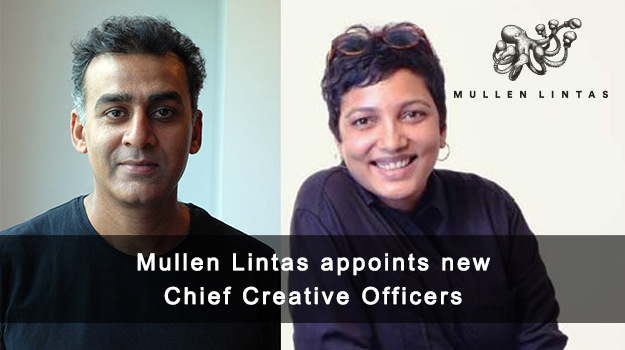 With Azazul Haque and Garima Khandelwal onboard, the move is expected to bring double-barrel creative firepower to the agency. The duo will be responsible to produce an unfair share of attention for clients of Mullen Lintas by driving the creative vision of this ‘challenger-mindset’ led agency.

Speaking about the development, Amer Jaleel, Group CCO and Chairman, MullenLowe Lintas Group said “Mullen Lintas is a very special agency to the group. It was hand-crafted by a select bunch and managed to get into the top 10 among agencies on reputation probably faster than any agency in living memory. We took our time in figuring out the leadership and I have to laud our clients for exemplary conviction that they gave us this space and time. Garima Khandelwal and Azazul Haque are not just the best bets for the agency, they are the best bets for each other too. Gari is supremely artistically inclined and intuitive as a mind and Azaz is a fantastic articulator and craftsperson both of lofty truths and consumer language. Plus the two are among the coolest people in advertising. They are going to rocket our trail-blazing agency to stratospheric levels with dark shades firmly in place!”

Azazul Haque started his career with Lowe Lintas (then Lowe Lintas + Partners) back in 2001. Over the years that followed, he has worked with Bates, Publicis, Mudra, McCann, Contract and Ogilvy on well-known brands like Nescafe, Coca Cola, Nestle Maggi, Domino’s Pizza, Dabur, Maruti Suzuki, Havells, Amazon, Titan and Motorola, ICICI Bank, Bajaj Auto and Rajasthan Tourism, among others. His work for Havells (Shock laga), Domino’s (Pahli kamayi + Yeh hai rishton ka time), Rajasthan Tourism (Jaane kya dikh jaaye), Amazon (Mom be a girl again + Chonkpur Cheetahs) and Titan Raga (Mom to be) are memorable and widely appreciated. His work has been consistently recognized and rewarded at domestic and international award shows like Cannes Lion, D&AD Pencil, India and APAC Effie, Kyoorius, WARC et al. In 2018, he was awarded South Asia Creative Person of the Year (Runners Up) by a popular magazine.

Commenting on his appointment, Azazul Haque said “Leaving Ogilvy after 5-6 dream years is my life’s toughest career decision. And if it wasn’t Mullen Lintas then perhaps such a thought wouldn’t have crossed my mind ever. Mullen Lintas is a rare breed of agency. It has the solidity and experience of India’s one of the oldest agency, Lintas and the enthusiasm, passion, fearlessness of one of the youngest agency, Mullen Lintas; and most of its work reflects that. The invincible combination of deep-rooted insights and fearless, gutsy, experimental creative solutions has led to exponential growth of the agency. I love the way Amer has laid the foundation of the agency – there were no generals giving instructions but leaders like him working closely with the teams to inspire them. And that’s also my style of leading. Like Achilles. He swung his sword to inspire. I like swinging my pen to lead. It’s a herculean task to take Mullen Lintas to the next phase of glory. But I trust my Spartans here, and together, I believe, we can easily achieve it.”

Garima Khandelwal kicked-off her career in advertising with Ogilvy Delhi approximately 18 years ago. She moved to Mullen Lintas in 2015, and her former role as Executive Creative Director gave her an opportunity to influence the creative direction for some of India’s most celebrated brands. As the founding member of Team Mullen Lintas, she is responsible for the agency’s marquee work such as – Motilal Oswal (Equity experts), Tata Tea (Alarm bajne se pehle Jaago Re), MTV Beats, Bajaj Avenger and Too Yumm (National launch). Before moving to Mullen Lintas, she worked with Lowe Lintas where she lent her creative expertise to a diverse set of clients across categories. Some of the clients that she has been associated with include Suzlon PALS, Tata Tea (Kala Teeka), Axe (Boat Party), Liva, etc. She has also worked for Leagas Delaney, on the Skoda account for the European market, based out of Prague.

Talking about her elevation, Garima Khandelwal said “I am very proud to be part of the journey Mullen Lintas has had so far, the collective energy and the vision to punch above its weight. It has been a roller coaster of a ride, these 3 years have undoubtedly been the most exciting years of my career, with no two weeks the same. The icing is the trust that Amer has handed with the baton of its creative leadership. I want to nurture the culture that was home grown and embraced by everyone who came on board. And retain the child like enthusiasm and hunger to create work that stood out. I am looking forward to the next phase of the ride with Azaz, as we gear up to having a larger place under the sun. 2019 is going to be exciting.”

Both Garima and Azaz will be based out of the agency’s Mumbai office.