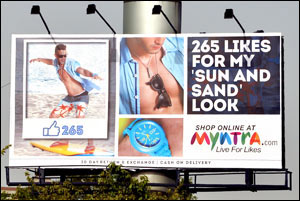 The online shopping platform has launched its latest campaign themed around selfies to create traction among the people.

The online fashion and casual lifestyle products shopping platform has launched its latest campaign titled ‘Live for Likes’ to promote the brand. The brand is running an OOH campaign across different cities such as Delhi, Bangalore, Hyderabad, Chandigarh.

Targeting corporate parks in Delhi and Bangalore, it has taken more than 25 sites going in for large format billboards and building wraps along with other formats. The campaign has been designed by Lowe Lintas and is executed on the outdoor front by Kinetic.

The idea of the campaign is themed around selfies, where the actors in the creatives have taken their selfies and put them on the board. One of the billboards has the message ‘256 Likes for my Sun and Sand Look’.

Vikas Ahuja, CMO, Myntra, says, “Selfies are a common trend among youngsters and people try to put their best foot forward to share pictures of themselves. Often, it is as important, or more important, to look good online as it is in real life. ‘Live for Likes’ is a well conceptualized campaign where our creative partner Lowe has tapped into this trend and married it with the key role that fashion plays in helping people look good.”

Rajesh Ramaswamy, executive creative director, Lowe Lintas, says, “We’ve all done some crazy things to get likes. We wanted to bring that alive. It had to be relatable, but at the same time also keep it fashionable. It is a difficult balance. We are really happy with the way Vishwesh (Krishnamoorthy) from Corcoise managed this. He’s new, raw and has a great sense of storytelling and aesthetics.”

G.V. Krishnan, executive director, Lowe Lintas and Partners – South, says, “While a whole lot of fashion players have built their brand in the offline space we, as an online e-commerce player, saw an opportunity to create a brand that could own fashion that makes you look great online. ‘Live for Likes’ allows us to connect with the youth and their fashion sentiment online, which our bold clients endorsed wholeheartedly.

Myntra.com has apparel, accessories, cosmetics and footwear from over 500 Indian and international brands which include adidas, Nike, Puma, Catwalk, Inc 5, United Colors of Benetton, FCUK, Timberland, Avirate, FabIndia and Biba.